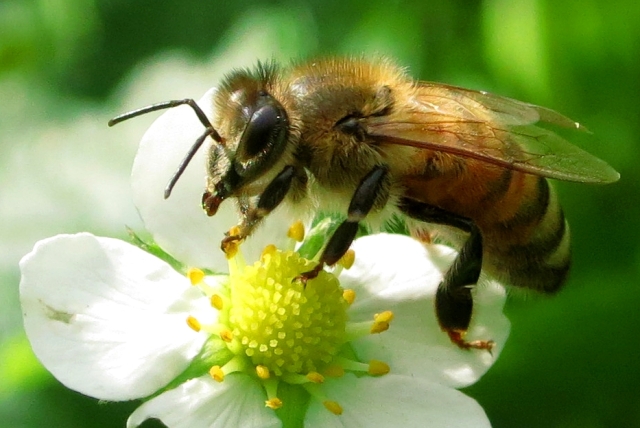 We have one strong hive which overwintered in Elkins Park. We eyed its strength and hoped to make our first successful split this season. We wanted the strong hive to raise a new queen for us so that we could build an additional hive. Upon inspection, we realized that we had, accidentally, excluded the queen into a super. Must we make all of the possible beekeeping errors?! The positive side of this error was their readying to swarm for lack of room and their building the most gorgeous queen cell. A queen cell is the cell that is built for raising a new queen and it looks very different from regular worker or drone capped brood. Here is a link to an image of a queen cell. We took that closed queen cell, some brood, workers, honey and NOT the active laying queen and put that all into a five frame nuc….a little hive. We crossed our fingers and not even two weeks later we discovered new brood and the loveliest, most graceful, youthful queen ever! Seeing that queen was like finding a wonderful treasure! I think we got that queen cell out of the big hive in the nick of time; otherwise, we would have seen some exciting, but unwanted, swarming action!

On Friday, June 28th; we were bragging about the picture perfect laying pattern of our newest queen. She was a beauty. She was productive, an artist, vital! And on Saturday, June 29th; she swarmed. That was quick! We had had a deep and medium, 10 frame so far and, last week, scraped swarm cells. We were going to add a super on Saturday…before they upped and left 30+ feet into a tree. The queen, despite having many positive qualities; was hep to swarming. I’m curious about the genetics behind the behavior. I wouldn’t want to encourage this quality in our hives. Anyway, we, currently, have plenty of bees left in this hive…we’ll see if we’ve got a queen once the weather clears a bit. 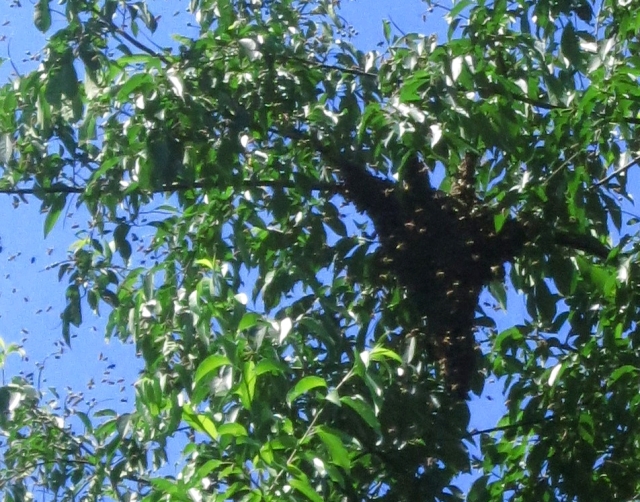 This entry was posted in Bees and tagged Beekeeping, splitting hive, swarm. Bookmark the permalink.